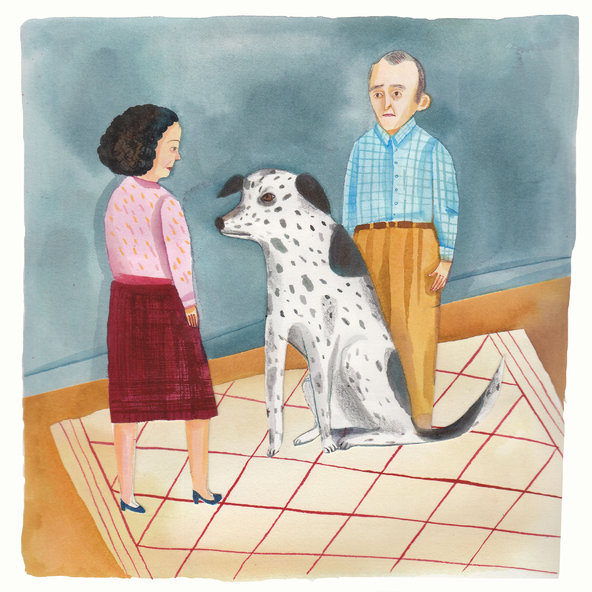 There’s one good thing about my old dog’s fading memory: He seems to have forgotten he hates me.

Our dog, Eddie, is 15 years old and generally in good health, but he’s showing his age. His hearing is about gone, and he can no longer jump on sofas or navigate a long flight of stairs. And he’s losing his memory. Either because of that or perhaps because he just doesn’t have the energy to bully me anymore, our geriatric dog is no longer the jealous creature who had been my nemesis over 10 years of marriage.

Eddie, a 40-pound Blue Heeler mix, was prone to possessive impulses and aggressive behavior with other dogs, and that didn’t change after he was adopted by the man who would become my husband and his two young children. He had settled into his new home from a rescue foundation barely four months before my husband and I met. The children were shy and polite to me, but the dog didn’t bother with manners. He sized me up from a distance and, on the first night I slept over, he peed in front of the closed bedroom door.

Eddie stayed on message through courtship and marriage. He barked when I came down the stairs to the kitchen in the morning, when I came home from work and whenever I tried to approach my husband. One move, one kiss, one dance, and my stepdog would work himself up into such hysterics that I was afraid he would bite me (he never did).

When Eddie wasn’t expressing hostility, he showered me with indifference. He came to me only when called repeatedly and tolerated petting just for a few seconds, offering tepid tail wagging. I grew up with dogs and I was hurt by his rejection. Some research suggests that dogs are capable of jealousy, but I never found a study that would tell me how long it took them to get over it.

On bad days, Eddie got under my skin and I wished he’d escape — successfully. No matter how much I jogged with him, fed him biscuits or took care of him when my husband traveled, my attempts at bonding were rebuffed or only temporarily welcomed. To him I was forever the intruder, the attention hog, the competitor who kicked him out of his daddy’s bedroom and — maybe as unforgivably — no longer let him lick the dirty dishes in the dishwasher.

Over time the children grew up, wedding anniversaries came and went, the household moved to New York from California, but through every milestone our dog remained resolute in his allegiance to only one master.

Friends were used to my complaints. One suggested therapy. My sister occasionally asked — jokingly — if I had poisoned the dog yet. On the contrary, we all took such good care of Eddie that he seemed indestructible.

But Eddie was aging faster than we were and the thaw in our contentious relationship came, unexpectedly, as he began showing his mortality.

With time, dogs, much as humans do, will have mobility problems, lose learned behavior, slow down, forget. We first noticed that Eddie limped slightly after long walks. His veterinarian diagnosed arthritis in his front legs. One day, he could no longer propel himself into a cushioned chair or onto our beds. Eventually, Eddie had trouble rising from his own bed and could only do it tentatively, legs splayed like a newborn foal touching ground for the first time.

Other physiological changes came in spurts. He stopped greeting us at the door because he could no longer hear us coming in. He sometimes couldn’t or wouldn’t wait for his walks, so he marked a corner of the living room as his indoor territory to relieve himself.

Our fearless junkyard dog, the one we were afraid to take to dog parks and who was expelled from more than one kennel for brawling, grew clingy and afraid to roam. He’s constantly underfoot in the kitchen no matter how often we tell him to sit. He licks himself noisily in front of guests. He refuses to pose for selfies.

But as the canine equivalent of a centenarian, Eddie finally has eased up on me. He lets me caress him and lingers under my touch. He follows me around and seems to enjoy my company. The barking is long gone. Through his aging, Eddie became a normal pet to me.

I’ve aged and changed too. I had already softened a couple of years earlier when Eddie almost died from a major blockage in his bowels. As I lay awake while the animal hospital kept him on an IV, I pondered a dog-less life and was overcome with regret. Eddie had been the relentless companion and protector, the fixture in our home once the kids had grown and gone. He had brought out to me my husband’s tender side. He was the safe topic of conversation at a tense dinner table. In my stepfamily, I realized, Eddie was a unifier.

But true affection, and yes, love, didn’t come until this last phase, when Eddie sleeps most of the day and we have to clap to get his attention. Every day I enter our home clapping, holding my breath until I hear the click-click of paws on the wood floor and dreading the day I will not.

As if we needed reminding, the owner of his longtime kennel recently told us that Eddie was getting too old for weeklong stays while we traveled. He explained that he didn’t want to make a life-or-death decision on his own if he couldn’t reach us.

For the time being, Eddie has a healthy appetite and all his choppers. He still demands his walks and gets excited at the sight of the leash. He still greets my husband — and only my husband — like it’s midnight on New Year’s Eve.

But there’s no going back to the sour personality that clashed with mine and once made me dream of “Lost Dog” ads. I wonder if Eddie realizes that neither of us ever posed a threat to the other’s relationship with the love of our lives. Does he appreciate that we both succeeded in carving out roles in our ready-made family?

Rivals no more, we are finally able to simply be members of the same pack.

Mireya Navarro is a reporter for The New York Times and the author of the memoir “Stepdog.”