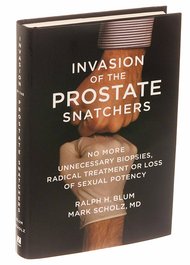 As I scuffed through the stations of the prostate-cancer cross these past two years, I sometimes wondered whether I wasn’t a dupe caught up in a Robin Cook medical thriller.

Sure, the biopsy (so I was told) showed that my prostate was cancerous. And after it was removed, the pathology report revealed that the cancer was unexpectedly aggressive, thrusting me from the relative comforts of Stage 1 to the deep woods of Stage 3.

But at least on the surface, the cancer itself never did any damage. It was the treatments that razed me — the surgery, radiation and hormones producing a catalog of miseries that included impotence, incontinence and hot flashes. And a small voice kept whispering: What if this is all a lie? A dark conspiracy of the global medical-industrial complex?

Mr. Blum, a cultural anthropologist and writer, has lived with prostate cancer for 20 years without radical treatment, and Dr. Scholz is an oncologist who has treated the disease exclusively since 1995.

Their book, written tag-team style, is a provocative and frank look at the bewildering world of prostate cancer, from the current state of the multibillion-dollar industry to the range of available treatments.

About 200,000 cases of prostate cancer are diagnosed each year in the United States, and the authors say nearly all of them are overtreated. Most men, they persuasively argue, would be better served having their cancer managed as a chronic condition.

Why? Because most prostate cancers are lackadaisical — the fourth-class mail of their kind. The authors say “active surveillance” is an effective initial treatment for most men.

They add that only about 1 in 7 men with newly diagnosed prostate cancer are at risk for a serious form of the disease. “Out of 50,000 radical prostatectomies performed every year in the United States alone,” Dr. Scholz writes, “more than 40,000 are unnecessary. In other words, the vast majority of men with prostate cancer would have lived just as long without any operation at all. Most did not need to have their sexuality cut out.”

Yet radical prostatectomy is still the treatment recommended most often, even though a recent study in The New England Journal of Medicine suggested that it extended the lives of just 1 patient in 48.

And surgery, of course, is most often recommended by surgeons and urologists — who are also surgeons. Mr. Blum writes: “As one seasoned observer of the prostate cancer industry told me, ‘Your prostate is worth what Ted Turner would call serious cash money.’ ” As for patients, their rational thinking has been short-circuited by the word “cancer.” Scared, frantic and vulnerable — relying on a doctor’s insight — they are ripe to being sold on surgery as their best option. Just get it out.

Every urologist I met with after my diagnosis recommended surgery, even though it was believed then that I had a low-risk Stage 1 cancer. The best advice came from my personal urologist, who declined to do my operation because it was beyond him: “Avoid the community hospital guys who do a volume business in prostates.”

I did, but I’m still maimed. In my experience, doctors play down punishing side effects like incontinence, impotence and shrinking of the penis. Those are just words when you hear them, but beyond language when you go through them.

Despite the impression the authors give, though, judging the velocity or voraciousness of a prostate cancer can still be imprecise. I know this firsthand.

After my biopsy, it appeared that I had a Stage 1 cancer, a doddering old nag that the authors would have designated for active surveillance. As it turned out, I had an especially pure Stage 3 cancer, a real top-fuel eliminator in terms of velocity (and hunger).

I’m a wild card, the 1 man in 48 saved by surgery. Without it, my doctors wouldn’t have learned the cancer was so advanced, and wouldn’t have given me the hormones and radiation that helped keep me alive.

So yes, prostate cancer is a dark and mysterious country, and Mr. Blum and Dr. Scholz are good, levelheaded guides through these thickets. And in telling men to slow up and take a deep breath after they learn they have prostate cancer, they provide an invaluable service. I wish I had had this book back in 2008.

But all of this raises one last stark question: Was my life worth the 47 other prostatectomies that probably didn’t have to be performed?