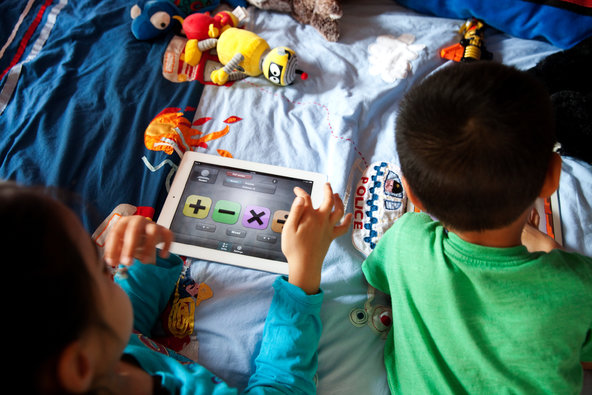 Derek and Isabella Galustians play on their tablets. The siblings each have their own tablet and each have one of their parents’ old phones, without a phone plan, to use apps and play games.Credit Emily Berl for The New York Times

The digital world is changing around us at a dizzying pace; parents want guidance, and pediatricians want to answer their questions with helpful and scientifically valid advice. The American Academy of Pediatrics’ policy on children and media is probably best known for two recommendations: to discourage any screen time for children under 2, and to limit screen time to two hours a day for older children.

As new technologies have transformed many aspects of daily life, new questions have arisen. Did discouraging screen time for children under 2 mean no Skyping with Grandma? Did a limit of two hours for older children mean that if a sixth-grader did her homework on her computer, as assigned, she had used up her allotment? When those guidelines were originally composed in the 1990s, screen time was essentially taken to mean time in front of the television, or time spent playing old-style computer games; by 2013, the policy had changed to limiting “total entertainment screen time” for older children, while still “discouraging” all screens for those under 2.

The children and media policy and guidelines are undergoing review and revision, but in the interim, the academy convened Growing Up Digital, a symposium of experts and researchers last May, and came up with a list of tips — “Beyond ‘turn it off’: How to advise families on media use” — published in September in AAP News, which goes to pediatricians. These suggestions were meant to expand and enhance the existing guidelines by taking notice of new technology and new science.

“We have a variety of policy statements, but technology is always faster than how we can deal with it,” said Dr. Ari Brown, an Austin, Tex.-based pediatrician who was the chairwoman of the American Academy of Pediatrics’ Children, Adolescents and Media Leadership Work Group, and the lead author of the article. “We need to be able to provide practical guidance for parents that they can use now based on science.”

Although these tips on children and media were not meant to replace the existing guidelines, they attracted a good deal of media attention themselves, some of which suggested that a major change had taken place: The collective pediatric wisdom, which had been essentially anti-screen, was now opening the door and letting in the LED light.

”When you look at the press response, this was a foreseeable response but an unfortunate response: The AAP says media is great for kids!” said Dr. David Hill, the chairman of the A.A.P. Council on Communications and Media’s executive committee, and one of the authors of the article. In fact, he continued, the message was much more nuanced: “The A.A.P. says media are diversifying, that quality of the media is critical, that there is much we still have to learn.”

The pediatric wisdom has always been that you should err on the side of protection and prevention; we advise no screens for children under 2 because there’s no evidence of benefit, and a lot of concern about harm; because we worry about what screen time may be replacing in the lives of young children, who need direct human interaction to learn and develop.

Take that Skyping-with-Grandma question (or Skyping with a deployed military parent), which keeps being raised as an example of good screen time for children under 2. Every single pediatrician I spoke with brought that up — not, I suspect, because it’s such a burning question for parents, but because it’s pretty much the best reason anyone has come up with for encouraging a very young child to look at a screen.

“There are some preliminary studies — and I emphasize preliminary — that babies as young as six months can learn from prosocial media,” said Dr. Victor Strasburger, a distinguished professor emeritus of pediatrics at the University of New Mexico School of Medicine and a co-author of the original policy statement, “but they learn 20 times better from parents. I think very judicious use of technology for under-2s may be okay, but personally I don’t see the hurry.”

Whatever we may learn about what young children can or cannot learn from the screens in their lives, what we know is that they need human contact and interaction — and there’s a real worry that screens may take up time and space in babies’ and toddlers’ lives and replace some of what they most need.

But Dr. Dimitri Christakis, a pediatrician who directs the Center for Child Health, Behavior and Development at Seattle Children’s Research Institute, who was one of the authors of the existing guidelines, argued in a 2014 editorial in JAMA Pediatrics for the value of high-quality electronic experiences even for very young children, and for up to an hour a day of what might be considered playing with educational digital toys.

What we should be emphasizing for older children, he said, is that parents need to make sure that they get true nonscreen time built into their days. That means, in part, no screens in the bedroom, and cellphones left for the night in a different room. Families need to create a couple of hours of high-quality offline time each day.

Even high-quality educational electronic content shouldn’t crowd out the other parts of childhood. “Unstructured, unplugged playtime is very important for all children and especially very young children,” said Dr. Benard Dreyer, the president of the American Academy of Pediatrics and a professor of pediatrics at N.Y.U. “This does not negate the previous recommendations,” he told me. “We still don’t think kids under 2 should be watching TV; we still don’t think older kids should be spending more than two hours a day watching TV.”