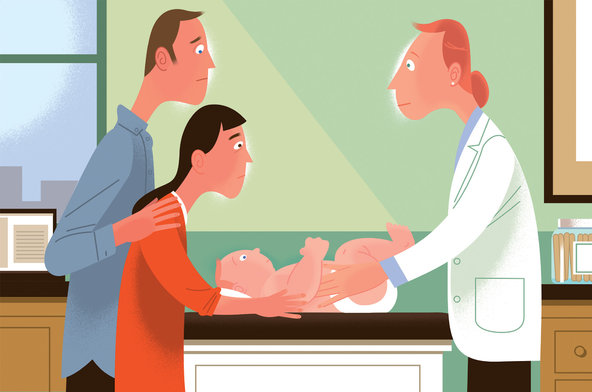 When my twin sons were 2½, their pediatrician detected a hernia in the right groin of one of the boys. The doctor minced no words: The hernia would not repair itself and surgery was necessary to avoid a serious, potentially life-threatening complication. But he added reassuringly that the operation was routine and the patient nearly always goes home the same day.

I selected a top-notch pediatric surgeon at a nearby hospital who found during surgery that my son had a second hernia on the left side that he also repaired. He was in recovery for an hour or so, where he was watched for possible complications while the anesthesia wore off. Then we took him home, put him in his crib, curled in a fetal position, and raised the crib’s bar to keep him safe.

Despite that precaution, during the night, he climbed out over the bar, went to the bathroom and climbed back into his crib, all without waking us. The next morning he saw a lot of snow outside the house, and after downing a hearty breakfast, went out to play with his brother. If only grown-ups recovered from surgery even half as quickly!

Because genetics can play a role in pediatric hernias, I fully expected that his identical twin brother might develop one too, but 44 years later this has yet to happen.

“Inguinal hernia correction is the most common elective surgery that pediatric surgeons perform,” said Dr. Shaun Steigman, a pediatric surgeon at Weill Cornell Medical College who also operates at New York Methodist Hospital in Brooklyn. The word “elective” distinguishes it from an emergency operation, which repairing a hernia is meant to avoid.

The two types of hernias that most often affect children are inguinal (the kind my son had), which occurs in the groin area, and umbilical, which occurs around the navel.

Pediatric hernias stem from a defect present at birth — a hole in the muscle wall of the abdomen. While not all such holes develop into hernias, in those that do, abdominal tissue, usually a portion of the small intestine, can protrude through.

Hernias in children are often detected during a routine pediatric checkup, or by a parent who notices a lump on one or both sides of the groin or around the navel while changing a diaper or bathing the baby. A telltale sign is a bulge in the groin when the baby is straining, crying or coughing.

In making the diagnosis, Dr. Steigman said he might try to get the hernia to pop out by making a young infant cry or an older baby laugh. He asks a toddler or older child to jump or cough.

In some cases the protruding tissue of a hernia can become trapped, an often painful condition called incarceration. This situation is especially dangerous if the intestine is pinched hard enough to cut off its blood flow, a condition called strangulation.

In addition to a lump, symptoms of incarceration or strangulation may include severe pain, fever, nausea and vomiting, or an inability to pass gas or produce a bowel movement.

An incarcerated or strangulated hernia can cause severe complications and even death. Emergency surgery is necessary if the doctor cannot push the intestine back through the hole by massaging the protrusion from outside the child’s abdomen.

Inguinal hernias affect from 3 percent to 5 percent of children born full-term, the vast majority of them boys. During fetal development, the testes have to pass from the abdominal cavity through the inguinal canal to reach the scrotum. Before birth, the opening to the canal is supposed to close. When it doesn’t, a hernia can result.

Children born prematurely are six times as likely to have an inguinal hernia as those born full-term. Up to 30 percent of premature infants develop an inguinal hernia, and in 60 percent of them tissue from the abdominal cavity gets trapped, according to Dr. Andre Hebra, chief of surgery at the Medical University of South Carolina Children’s Hospital.

Hernias are usually detected during the first year of life. In babies born prematurely they are often surgically corrected before the infants are discharged from the neonatal intensive care unit. But sometimes hernias do not become apparent until a child is much older, and occasionally not until adulthood.

Umbilical hernias, which affect about 10 percent of children, result when the hole in the abdominal muscles through which the umbilical cord passes in utero fails to close after birth. These too can ensnare a portion of the small intestine. However, unlike inguinal hernias, which always require surgical correction, “95 percent of umbilical hernias close on their own,” Dr. Steigman said. “They are less likely to get something trapped, so we wait until age 4 or 5 to repair them if they don’t self-correct.”

A third type, called a femoral hernia, is more common in girls. It usually shows up as a bulge in the groin, upper thigh or labia, the skin folds around the vaginal opening. It is associated with a high risk of strangulation and must always be surgically repaired.

Surgery to correct a hernia is straightforward and usually done as an outpatient procedure in children older than 3 months, Dr. Steigman said. In a majority of cases, the repair is done through open surgery, though Dr. Steigman said he prefers to operate laparoscopically, through two tiny incisions. But either way, the incision is very small and the child heals rapidly.

All that is required before surgery is a routine checkup — blood tests, urine analysis and a discussion of medications the child regularly takes. If the hernia is difficult to see or feel, an ultrasound exam may be done.

In preparing for surgery, the child should not eat for six to eight hours, consume breast milk for four hours or drink clear fluids for two hours before the scheduled operation to minimize the risk of aspirating stomach contents. The operation is most often done under general anesthesia, but even if local anesthesia is planned, there is always the possibility that general anesthesia will become needed during the operation.