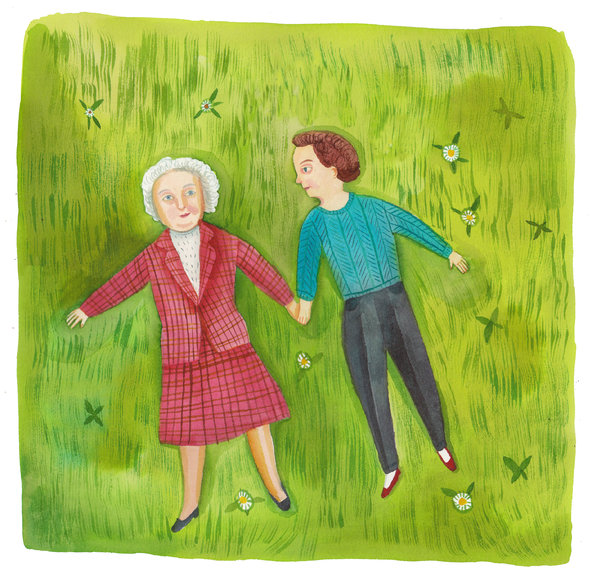 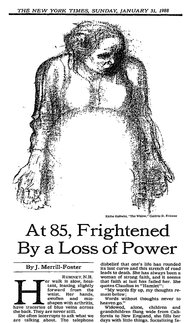 In 1988, the author’s mother wrote in The Times about her own mother’s dementia. Read the full article in TimesMachine. Credit The New York Times

The first sign that the Alzheimer’s disease that ravaged my grandmother was back for her daughter was when Mom began having trouble saying “CNN.” She’d watched the cable news network for years with ferocious interest ever since returning from a life abroad in the Foreign Service to rural New Hampshire. There she nested in her mother’s house, saying she’d never move.

It was a distinctly peaceful life. I’d listen to her play the grand piano — the passion that had taken her to Juilliard decades earlier — and marvel at the lightness of her hands on the keys. On Sundays, she was the favorite lector at our church, reading the liturgy with an elegance instilled by her mother and grandmother, both trained elocutionists.

She also wrote and recorded essays on country living for NPR on subjects like “Mahler and Macaroni.” Words mattered a great deal to her. She mattered the world to me. I used to say I’d won the lottery when it came to mothers.

After Dad died, my mother continued to live alone in the big white house on the common. It was here in 1988 that she’d written a keenly observed Sunday commentary for this newspaper about her own mother’s battle with aging — and the dementia that “erased her life, line by line.”

She wanted me to promise that if her own light dimmed – or as she put it, “when I lose my mind too” – I wouldn’t upend my own life to care for her. But we never came up with a real plan.

About a year after CNN became “C…D…D…” and the home care team we’d improvised announced my mother’s decline was too much for them, my brothers and I barely convinced her to “visit” sunny California where my middle brother lived.

That visit became a new “post” in a fancy retirement community where, for $7,500 a month, she had her own studio and bathroom. She enjoyed music events and a stately dining room with a menu. There was even a church on the corner.

But like so many living with Alzheimer’s, Mom’s biorhythms were upside down. She’d often sleep during the day and be up all night doing what is known as “exit-seeking.”

Nights are the Achilles heel of most eldercare facilities staffed by the fewest caregivers — and the most inexperienced. Across the country, in many well-meaning Alzheimer’s units, memory care residents are treated with confinement.

So Mom “graduated” to the locked Memory Care unit for her “safety.” It broke my heart to watch her on tiptoes, peering through the locked door’s porthole across to the dining room she once enjoyed.

Alzheimer’s is not a mere matter of Swiss cheese memory and odd behaviors. It is a serious medical condition. It is terminal. It should be known for what it is: Brain Failure.

One morning, Mom emerged from her Memory Care room covered with bruises. The police came. The state came. There was even suggestion of a rape kit because my mother, clearly agitated, could say only, “the man, the man.”

We will never know what happened. But it stands to reason that if you lock up the most advanced Alzheimer’s residents with their attendant behavioral disorders, and apply nominal supervision, well, something is bound to happen. On the night in question, one newly hired caregiver attended 17 residents.

So we moved her again, this time to Seattle, close to my eldest brother and me, thereby violating the cardinal rule of Alzheimer’s care: thou shalt not move the patient. Change registers a full 10 on the Alzheimer’s Richter scale. The more Mom’s brain failed, the more I twirled to try to make things better.

Within a matter of weeks in the new place, she had fallen and broken her hip. Surgery followed, then three months in a rehab facility, and finally a move to a small adult family home with just six residents. She was exhausted and utterly disoriented. I was a wreck.

Still, I knew I was among the lucky ones. Despite the recent scan that showed her brain a mostly blank white slate, my mother somehow always managed to recognize me during our visits (although she’d begun calling me “Mom.”)

Where once I’d thought I’d lose my mind if she asked me the same question one more time, now I prayed to hear any full sentence just one more time. Ever the peripatetic family caregiver, I rarely stopped to inhabit my mother’s world: the one with no past, no future, just the present.

On our last Mother’s Day together, I took her to the big morning Mass at St. James Cathedral. As I attempted a Houdini maneuver getting her out of the car, up the curb and down the sidewalk to the church door, she somehow slithered from my grasp.

My mother sank to the ground in what seemed like slow motion. She never made a sound. She just lay there in the green grass in her rose-colored tweed suit, brilliant white hair glinting in the spring sun, blue eyes open wide, staring straight up into an unusually cloudless Seattle sky.

With church bells pealing through the cool morning air, my beautiful, brilliant mother stretched out her arms and made angels wings in the grass.

And all the doctors and all the medications and all the years of worry that couldn’t bring my mother back together again, also couldn’t defeat the magic of that moment.

I lay down next to her, threaded my fingers through hers, and for a brief wondrous moment, we held the present.

Mary Claude Foster is a journalist living in Seattle.