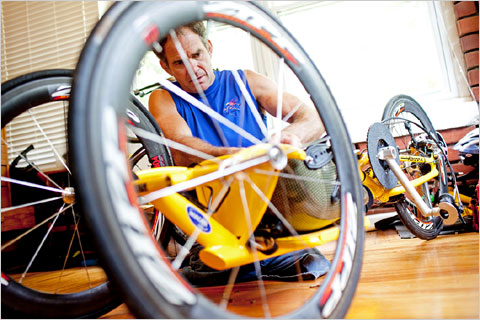 David Walter Banks for The New york Times Krige Schabort discovered the sport of wheelchair racing during rehabilitation from a war injury.

During any road race, it’s impossible not to be inspired by the disabled runners in your midst. Whether you’re at the front or back of the pack, you often see someone pushing a wheelchair or a runner guiding a blind athlete.

But unless you’re a bystander, most runners miss the wheel chair race, which typically starts first and often ends in a blur of speed across the finish line.

Krige Schabort, 45, is one of those racers you may have missed. Mr. Schabort, now a professional wheelchair racer, lost both legs while serving in the South African military in Angola. He discovered the sport of wheelchair racing during his rehabilitation. In 2002 and 2003 he won the wheelchair division of the New York City Marathon.

“The start of the New York City marathon is brutal,” Mr. Schabort says. “There is no holding back. That one mile climb up the Verrazano Bridge is really amazing, really challenging.”

Even so, he plans to be at the starting line again this year.

“New York is like a gold medal at the Olympics,” he says. “It’s not really about the time. It’s about the place.”

To hear more from Mr. Schabort, go to our Running Voices page. You’ll also hear stories of other athletes with disabilities, including:

Phil Packer: A British army officer, Phil Packer was paralyzed in Iraq during a February 2008 rocket attack. He was told he would never walk again, but after a year of rehabilitation, he began to regain some movement in his legs. In April, he completed the London marathon over a two-week period.

Team Hoyt: Team Hoyt is a father-son racing team that has been taking part in road races since 1977. Rick Hoyt has had cerebral palsy since infancy, which has left him unable to control his limbs or speak. With his father Dick pushing his wheelchair, Rick has taken part in 270 marathons, nearly 70 triathlons and numerous shorter races. Dick Hoyt estimates that Team Hoyt has crossed at least 1,000 finish lines.