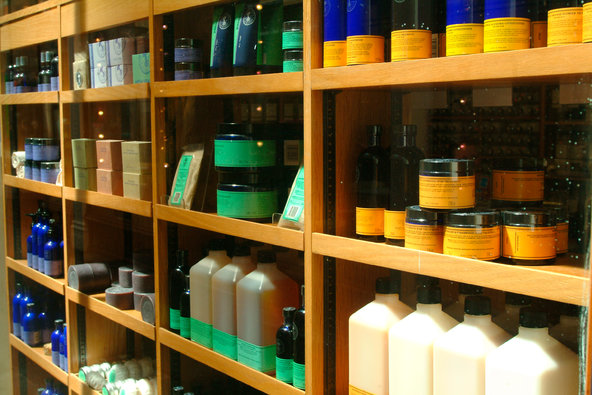 Cosmetic and lotion bottles contain phthalates, a chemical that allows the plastic to be flexible. Absorption of phthalates are also linked to preterm births and impaired neurodevelopment in girls.Credit Getty Images

Every day, children and adults are exposed to a variety of chemicals found in common household items. Now a growing body of research suggests that many of these chemicals — which are used to make plastic more flexible, fruits and vegetables more abundant and upholstery less flammable — may also pose a threat to the developing brain.

While the link between early chemical exposure and neurodevelopment disorders in children remains a matter of scientific debate, a unique coalition of top doctors, scientists and health advocates is calling for more aggressive regulation. The goal is to protect expectant mothers, infants and children from neurotoxic chemicals by stepping up efforts to curb air pollution, remediate old lead pipes, phase out certain pesticides, ban endocrine-disrupting chemicals used in food packaging and plastics and come up with a plan for getting rid of furniture laden with fire retardants.

The scientists note that neurodevelopmental disorders are complex and have multiple genetic, social and environmental causes. But most chemicals in use today were not adequately tested for safety before being allowed on the market, said Dr. Jeanne Conry, an obstetrician-gynecologist and a past president of the American College of Obstetricians and Gynecologists, which is part of the coalition.

“Before we can prescribe medicine, we have to prove it’s safe,” she said. “So how come with the chemical industry, we assume everything is safe and have to prove there’s harm?”

On Friday the coalition endorsed a first-of-its-kind consensus statement called Project Tendr, which stands for Targeting Environmental NeuroDevelopmental Risks. The statement was published in the scientific journal Environmental Health Perspectives, and related articles are being published over the next few months in endocrinology, nursing, pediatrics and epidemiology journals.

“We as a society should be able to take protective action when scientific evidence indicates a chemical is of concern, and not wait for unequivocal proof that a chemical is causing harm to our children,” the statement says. 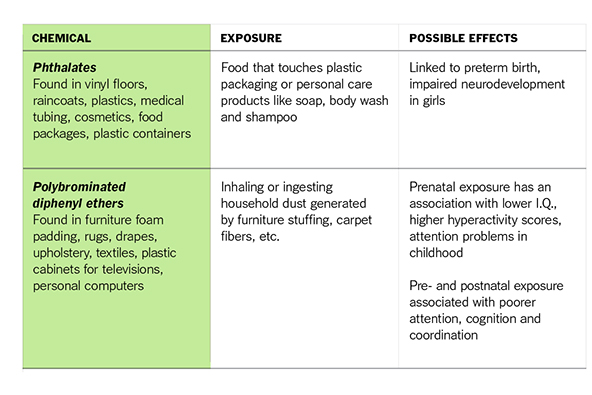 This chart shows a list of common chemicals and their possible effects on the body. Click here to view the entire chart.Credit Centers for Disease Control and Prevention and Project Tendr

The call to action comes just one week after President Obama signed into a law a much-debated overhaul of the nation’s 40-year-old toxic chemical rules. The update to the 1976 Toxic Substances Control Act subjects some 64,000 existing chemicals to eventual safety testing. But critics say the changes don’t go far enough, and the testing of chemicals is far too slow — just 20 chemicals at a time with a deadline of seven years per chemical. And the new law doesn’t cover pesticides used in food production – which critics say are one of the largest sources of childhood chemical exposures.

An official with the American Chemistry Council, which represents companies that make flame retardants, plastics and phthalates, said the new law already addresses the concerns raised by the Tendr coalition. The new rules give more authority to the Environmental Protection Agency and require the agency to take into account vulnerable populations like pregnant women, children and the elderly, she said.

“This new law will give Americans greater confidence that chemicals in commerce are being used safely,” the American Chemistry Council said in a statement.

The Tendr coalition includes pediatric neurologists, several minority physician associations, nurses, learning disability advocacy groups, environmental organizations, and the Endocrine Society, which has compiled several scientific statements documenting adverse health effects linked to endocrine-disrupting chemicals that mimic or disrupt the hormones in our own bodies. Dozens of scientists and health providers have signed the statement, as has Linda Birnbaum, director of the National Institute of Environmental Health Sciences and the National Toxicology Program.

The bottom line: The group wants the chemical industry to prove a chemical is safe, rather than waiting on the medical and scientific community to prove it is harmful. “We’re saying, shift the burden of proof,” Dr. Conry said.

Wading into a potentially contentious issue like regulation of chemicals is unusual for ACOG, a professional medical association for doctors who care for pregnant women. The group has been alarmed by rising rates of neurodevelopmental disorders and other health problems in children, which it linked to toxic exposures in a 2013 scientific paper.

National health surveys show that 15 percent of children had a developmental disability in 2008, up from 12.8 percent in 1996. Researchers say changes in diagnostic criteria and a greater awareness of developmental disorders including autism, attention deficit disorders, and other learning disabilities may explain some of the increase in rates, but not all of it.

The chemicals singled out by the coalition are widely used, and manufacturers and some experts say more research is needed to demonstrate they have harmful effects. They include:

Studies show almost all American women have these chemicals circulating in their bodies during pregnancy. A recent study of about 300 women found detectable levels of pesticides, flame retardants, phthalates, PCBs and other chemicals in 99 percent to 100 percent of the women tested.

Gestation is a particularly vulnerable time for the developing fetal brain, because it is growing so rapidly, said Irva Hertz-Picciotto, co-executive director of Project Tendr and director of the MIND Institute Program in Environmental Epidemiology of Autism and Neurodevelopment at the University of California, Davis.

Many chemicals of concern are endocrine disruptors, which can interfere with the activity of the body’s own hormones, like thyroid hormones, estrogen and androgens. These hormones play an important role in healthy brain development, said Heather B. Patisaul, professor at the Center for Human Health and the Environment at North Carolina State University at Raleigh.

“The goal is not to demonize every chemical on the market,” Dr. Patisaul said. “We need to find the group that are harmful, and figure out why, and develop new chemicals that are significantly less harmful.”

How to Limit Your Exposure to Toxic Chemicals

A coalition of doctors, scientists and health advocates says you may be able to reduce your overall exposure to toxic chemicals by taking the following steps: