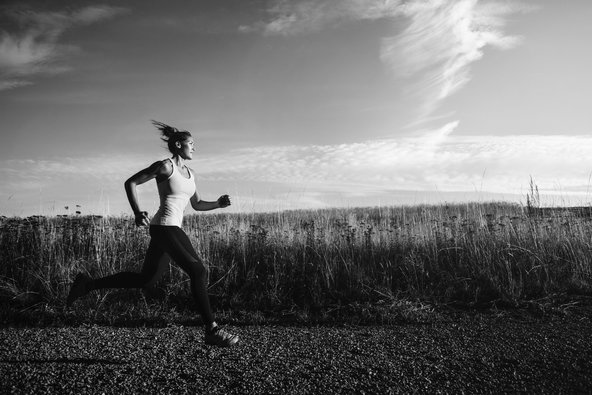 For many of us, the most pressing question about exercise is: How little can I get away with? The answer, according to a sophisticated new study of interval training, may be very, very little. In this new experiment, in fact, 60 seconds of strenuous exertion proved to be as successful at improving health and fitness as three-quarters of an hour of moderate exercise.

Let me repeat that finding: One minute of arduous exercise was comparable in its physiological effects to 45 minutes of gentler sweating.

I have been writing for some time about the potential benefits of high-intensity interval training, a type of workout that consists of an extremely draining but brief burst of exercise — essentially, a sprint — followed by light exercise such as jogging or resting, then another sprint, more rest, and so on.

Athletes rely on intervals to improve their speed and power, but generally as part of a broader, weekly training program that also includes prolonged, less-intense workouts, such as long runs.

But in the past few years, exercise scientists and many of the rest of us have become intrigued by the idea of exercising exclusively with intervals, ditching long workouts altogether.

The allure of this approach is obvious. Interval sessions can be short, making them a boon for anyone who feels that he or she never has enough time to exercise.

Previously, I have written about a number of different interval programs, involving anywhere from 10 minutes of exhausting intervals in a single session to seven minutes, six, four and even fewer. Each program had scientific backing. But because of time and funding constraints, most studies of interval training have had limits, such as not including a control group, being of short duration or studying only health or fitness results, not both.

So scientists at McMaster University in Hamilton, Ontario, who had themselves conducted many of those earlier studies of interval training, decided recently to mount probably the most scientifically rigorous comparison to date of super-short and more-standard workouts.

They began by recruiting 25 out-of-shape young men and measuring their current aerobic fitness and, as a marker of general health, their body’s ability to use insulin properly to regulate blood sugar levels. The scientists also biopsied the men’s muscles to examine how well their muscles functioned at a cellular level.

Then the researchers randomly divided the men into three groups. (The scientists plan to study women in subsequent experiments.) One group was asked to change nothing about their current, virtually nonexistent exercise routines; they would be the controls.

A second group began a typical endurance-workout routine, consisting of riding at a moderate pace on a stationary bicycle at the lab for 45 minutes, with a two-minute warm-up and three-minute cool down.

The final group was assigned to interval training, using the most abbreviated workout yet to have shown benefits. Specifically, the volunteers warmed up for two minutes on stationary bicycles, then pedaled as hard as possible for 20 seconds; rode at a very slow pace for two minutes, sprinted all-out again for 20 seconds; recovered with slow riding for another two minutes; pedaled all-out for a final 20 seconds; then cooled down for three minutes. The entire workout lasted 10 minutes, with only one minute of that time being strenuous.

Both groups of exercising volunteers completed three sessions each week for 12 weeks, a period of time that is about twice as long as in most past studies of interval training.

But when the scientists retested the men’s aerobic fitness, muscles and blood-sugar control now, they found that the exercisers showed virtually identical gains, whether they had completed the long endurance workouts or the short, grueling intervals. In both groups, endurance had increased by nearly 20 percent, insulin resistance likewise had improved significantly, and there were significant increases in the number and function of certain microscopic structures in the men’s muscles that are related to energy production and oxygen consumption.

There were no changes in health or fitness evident in the control group.

The upshot of these results is that three months of concerted endurance or interval exercise can notably — and almost identically — improve someone’s fitness and health.

Neither approach to exercise was, however, superior to the other, except that one was shorter — much, much shorter.

Is that reason enough for people who currently exercise moderately or not at all to begin interval training as their only workout?

“It depends on who you are and why you exercise,” said Martin Gibala, a professor of kinesiology at McMaster University who oversaw the new study.

“If you are an elite athlete, then obviously incorporating both endurance and interval training into an overall program maximizes performance. But if you are someone, like me, who just wants to boost health and fitness and you don’t have 45 minutes or an hour to work out, our data show that you can get big benefits from even a single minute of intense exercise.”